Why Not Go with What Is?

The following is an excerpt from a recent David Ignatius column that can be read in full here:

... We have been living for eight years with the paradox of "conservative optimists" running our nation's foreign policy. That's what sticks in the mind in this last week of the Bush presidency. This administration has fused a dark, conservative view about the need for military power with a rosy conception about the perfectibility of humankind. The result has been a kind of armed do-gooderism -- and a foreign policy that has frightened and angered the rest of the world.
With the inauguration of Barack Obama, the moment has arrived for what I want to call the "progressive pessimists." This new worldview would marry the liberal desire to make life better with a realist's appreciation of the limits of political and military power. This is a gloomier progressivism than President Kennedy's 1961 admonition to "pay any price, bear any burden." We've tried that.

... Bush's great mistakes have been those of an optimist who believed in social engineering on a global scale. He rolled into Iraq convinced that this traditional tribal society could be remade in a Western image of progress. When he talked of democracy in Iraq, Afghanistan and other Muslim countries, there was a sense of inevitability -- that democracy and freedom are immutable historical forces rather than the product of frail and imperfect human decisions.

Ever since I grasped the idea of the implications of the Gospel, filtered down to me from Jesus Christ, St. Paul, Augustine, Martin Luther, the English Reformers, FitzSimons Allison, and Paul Zahl, I have been unable to view life apart from my newly found "spectacles". I have forgotten who to attest the following statement to, but I find that I cannot find many (if any) exceptions to it: "The only empirically verifiable aspect to Christianity is the bondage of the will." Empirically verifiable being that which can be presently tested from a present population of many, many instances that occur in real time right now.
The great tragedy in modern Christianity and American thought these days is high anthropology, or a high expectation of what both Christian and non-Christian people are capable of. It can be seen everywhere from the ultra-liberal secularism of Manhattan to the ultra-conservative religion of the Bible Belt. It would be wonderful if this conception of human nature were true but it simply is not, however one might slice the cake.

President Bush (who I like, by the way, which is quite an unpopular place to find oneself) seems to have melded his Methodist (high) anthropology with an optimistic, Hegelian view of the progressive march of history (maybe one who has more understanding of Hegel can either correct my argument or confirm it). This can be seen as introducing an antithesis (democracy) to a thesis (Islamic and totalitarian demagoguery) in order to create a synthesis (whatever might work out from that volatile soup... hopefully, something edifying). This seemingly relies on a free will which rationally chooses that which is good and right.

This same way of thinking was applied to economic regulatory policy. The idea from the Bush Administration in this regard (colored greatly by Alan Greenspan, who was, and presumably still is, a staunch adherent to the thought of Ayn Rand) was that less regulation from the government would enable the free market to regulate itself. This school of thought presumes that the individual units of the economy (human beings) would rationally act in an ethical manner because that would be the way to increase opportunities for gain (see Rand's The Virtue of Selfishness). 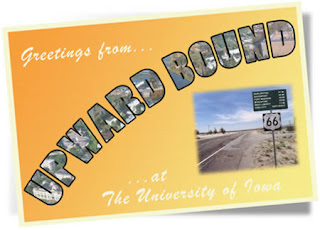 The problem with the foreign policy and economic ideas outlined above is that humans beings do not have free will and they are not rational. In fact, their wills are bound to themselves and they are quite irrational.
Now, would I propose more government regulation? As if the individual units of regulation (human beings) are capable of objective, rational, competent actions? That would be as naïve as the alternative. Would I propose non-intervention in foreign crises like Rwanda, WWII, or the Balkans? Not likely. All I would propose for all policies that have to do with human beings (which is all) is the presupposition of the bound will. That is all. And yet, at least for our policies, that is everything.
Posted by David Browder at 11:46 AM