Do You Have A Zombie Plan? 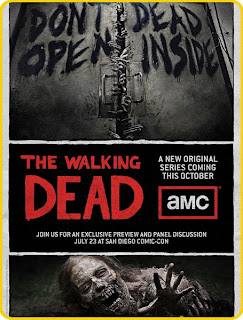 And when Jesus came to the place, he looked up and said to him, “Zacchaeus, hurry and come down, for I must stay at your house today.” So he hurried and came down and received him joyfully. And when they saw it, they all grumbled, “He has gone in to be the guest of a man who is a sinner.” And Zacchaeus stood and said to the Lord, “Behold, Lord, the half of my goods I give to the poor. And if I have defrauded anyone of anything, I restore it fourfold.” And Jesus said to him, “Today salvation has come to this house, since he also is a son of Abraham. For the Son of Man came to seek and to save the lost.” (Luke 19:5-10)

I hope you (like me) are really getting into the new AMC series The Walking Dead. Great story, great acting, and great cinematography. You see the zombies walking around people's middle-class homes or around a downtown area and it just looks believable (and terrifying). In the midst of this, there is the drama of realistic human interaction with this post-apocalyptic (zomb-pocalyptic) scape and it just rings true. Much like the fight over racial tensions that we looked at in the previous post.

There is something other-worldly, though, that happens in both Episode 1 and 2. And it is as surprising as it is touching. Rick Grimes is the sheriff's deputy who awakes from a coma only to find this terrible new world and reality have replaced that which was familiar. He cannot find his family and there are precious few survivors. In addition, he keeps running into zombies who want to eat him alive. 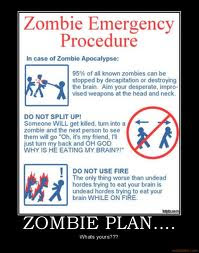 The first zombie he sees in Episode 1 is a really pathetic one. She is quite disfigured (picture included in the poster) and everything below her torso is unusable. Still, she wants to kill Rick just as much as any of the others do. After Rick later gets his bearings, regains his strength, and arms himself, he returns to the place where he first sees this particular zombie. She has crawled away so, at great risk to himself, he tracks her down. He then does something very un-Woody Harrellson-like. He looks at her with great compassion and says, "I am so sorry that this happened to you." He then painlessly puts her out of her misery.
In Episode 2, a group of survivors kill an exceptionally motivated and virulent zombie. After finding out that they are trapped and zombies identify potential victims primarily by smell, they decide to use the dead one as a source of "zombie grime" that will help them slip past unnoticed (gross, I know). Before they "harvest" the grime (which is not a scene for the kiddies, by the way... as if any of this is), Rick takes out the zombie's wallet and finds his name. There is some money and a photograph or two of his family. In a way, he eulogizes what was once a very real and motivated threat to life and limb. A sense of compassion enters the scene.
This reminds me very much of a section of Paul Zahl's book Grace in Practice called "The Relation of the Un-Free Will to Compassion". Here is a portion of that section: 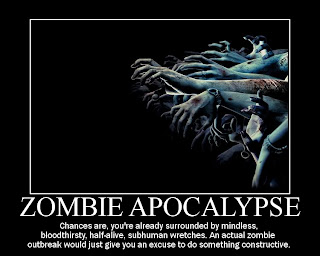 If you believe in people's free will, you will always judge them when they "choose" wrongly - or, as we say today, when they make "poor choices." If you understand, however, that these people are not free in their will, then you are able to summon some compassion in your dealings with them. One of the reasons we need to embrace the fact of the un-free will is for the sake of its effect on love. (p. 108)
In this admittedly extreme case, Rick Grimes understands that the walking dead do not choose to be who they turn out to be. Nobody dreams of becoming a ravenous monster who attacks their fellow man. Perhaps we can incorporate this idea of the walking dead into our own lives and relationships. Perhaps a little taste of hyperbole will do us all some good.
Posted by David Browder at 11:00 AM