Do You Have A Zombie Plan? Part IV

According to the Zombie Research Society (ZRS), May is National Zombie Awareness Month.  One might wonder why such an important observance is not in October, the month of Halloween.  That's easy.  In October, everyone has zombies on the mind.  It is always meet and right, however, to be aware of zombies while one is distracted by things such as the blooming trappings of Spring.  It might even be advisable to poke the azalea bush with a stick before taking a closer look.  As the ZRS warns, "What you don't know can eat you." 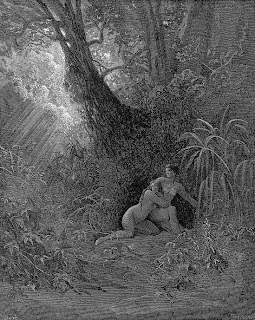 Another thing that we might not know is that zombie movies carry just as many mirrors into the psyche as their stars carry Solanum infection.  In 1932, the movie White Zombie (a quite good movie starring Bela Lugosi and the sultry Madge Bellamy which uses the same sets Dracula and Frankenstein did a year earlier) was an artistic questioning of the U.S. occupation of Haiti at the time.  Depression was on the land and American confidence was doing a double-take.  So, why were we in Haiti?

Night of the Living Dead, the first modern zombie movie, inadvertently touched a racial bruise in American society.  Others tapped fears of the fallout of nuclear war, terrorism, commercialization, and epidemic.  Fear is the operative word here and, as long as human beings have been self-aware, it has always found its presence powerfully felt.  Genesis 3.8-10: And they heard the sound of the Lord God walking in the garden in the cool of the day, and the man and his wife hid themselves from the presence of the Lord God among the trees of the garden.  But the Lord God called to the man and said to him, “Where are you?”  And he said, “I heard the sound of you in the garden, and I was afraid, because I was naked, and I hid myself.”

In the ZRS blog entry "Why Zombies are So Damn Scary", Alfred Hitchcock is quoted as saying, "There is no terror in the bang, only in the anticipation of it.”  It then goes on to say, "Zombies are the anticipation of a gruesome end met at the hands of an as-yet unseen ghoul, who even now may be clambering towards your door.  What’s more terrifying than that?" 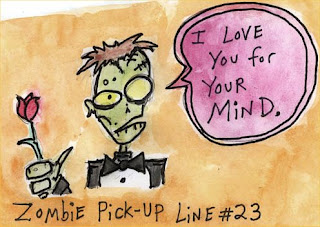 We feel naked in this world as we contemplate the as-yet unseen ghoul.  The one we feel helpless to master.  It can be the epidemic we discussed but what about when it lies within ourselves or our spouse?  What about when it's much more up-close and personal than an abstract and general fear?  What if it's a well-known ghoul that you've spent you entire life trying to bury with no permanent success?


Over the course of the next couple of weeks, we'll take the time to draw human bondage, the fear thereof, and the great hope we profess, out of the zombie movie genre.

Posted by David Browder at 8:09 PM