"And in the same region there were shepherds out in the field, keeping watch over their flock by night. And an angel of the Lord appeared to them, and the glory of the Lord shone around them, and they were filled with fear. And the angel said to them, “Fear not, for behold, I bring you good news of great joy that will be for all the people. For unto you is born this day in the city of David a Savior, who is Christ the Lord. And this will be a sign for you: you will find a baby wrapped in swaddling clothes and lying in a manger.” (Luke 2:8-12) 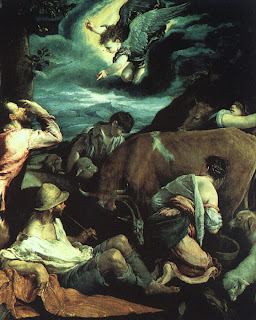 I was at a Christmas party this past weekend and found myself in a conversation with a delightful Christian fellow who is working towards a PhD in Philosophy. His chosen subject is the philosophy of beauty and aesthetics. Now, I don't pretend to know anything about that, but the idea certainly sent my mind racing.
For me, beauty conjures up majestic images of mountain ranges, great oceans, forests, and natural wonders. Theologians sometimes use these as proofs for a loving God. Maybe that works for some but, to me, they are monuments to natural indifference (at best) or places hostile to life (at worst). I should know since I've been lost on a mountain in Montana and caught in a riptide in the Gulf of Mexico.
Upon further reflection, I affirm the insight that beauty lies in the thwarting of man's compulsion to assert and define himself (original sin and bondage). Or, more specifically, the cessation of man’s striving. That, and the creation of faith. And, more often than not, this thwarting and creation is ugly to human eyes. When eyes are taken off technically correct dogmas and formulae and set upon the ugliness of the creation of faith, there is nothing 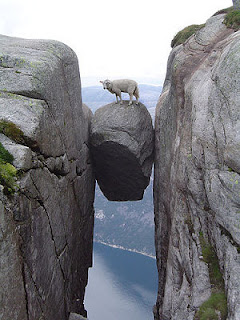 left to do but mourn.
“Blessed are those who mourn, for they shall be comforted.” Matthew 5:4
This is the difference between a wild-eyed and desperate acquiescence or liberation that comes from death and the interruption in human history that we believed happened two thousand years ago. And we actually believe (as mentioned in Luke 2 above) that This Child arrived in a place and manner that was below human achievement and glory. The glory of God was manifested in a troublesome backwater that had no value in the progressive march to Man’s triumph.
And if this recession, an addiction, or anything else has destroyed what you and everyone else perceives as value; and you find yourself faced with either the Albert Camus/desperate freedom of death or the Luke 2 version, hear these words from Martin Luther:
"If Christ had arrived with trumpets and lain in a cradle of gold, his birth would have been a splendid affair. But it would not be a comfort to me. He was rather to lie in the lap of a poor maiden and be thought of little significance in the eyes of the world. Now I can come to him."
Posted by David Browder at 1:38 PM