The Siren Call of Justice

“First you will come to the Sirens who enchant all who come near them. If any one unwarily draws in too close and hears the singing of the Sirens, his wife and children will never welcome him home again, for they sit in a green field and warble him to death with the sweetness of their song. There is a great heap of dead men's bones lying all around, with the flesh still rotting off them.” - Homer’s Odyssey

One of my favorite guilty pleasures involves logging on to Rivals.com and checking the news and recruiting updates for University of Alabama football. I do this way more than I should, and I love every minute of it. The other day on the main "bulletin board", where fans of every team congregate to discuss the upcoming season, I noticed a non-sequitur topic called “Alcoholism… Disease or Choice?”. One poster (a Florida fan) said this; ”Choice. Alcoholics are mentally weak people.” Another poster (a Georgia fan) said, “Both, it's a disease but with will power you can choose abstinence.” 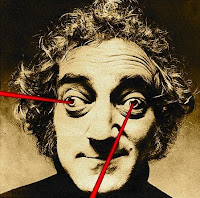 There are two ideas behind these thoughts. Both caused red-hot laser beams to shoot out of my eyes and fry the two posters in effigy. The first is a crass and cruel Pelagianism that is so prevalent in Christian circles and has been discussed at length on this blog.

The second necessarily proceeds from the first. It is a self-righteous and wrong-headed affirmation of justice. The idea that alcoholics made their bed, now let them lie in it. “Unlike me, these people are weak, and they should suffer the consequences,” they seem to chirp.

This attitude, also known as (with a nod to Bishop FitzSimons Allison) "the yeast of the Pharisees", is not limited to theological conservatism. Justice is a sweet, sweet sound to those who believe it does not condemn them. It hearkens over the land and sea and calls seductively and tantalizingly (much like a Shakira music video). Only when it is too late are the dead and rotting bones revealed, broken on the indifferent rocks of a legal shore.

St. Paul says in Romans 3: 10-12; “as it is written: "None is righteous, no, not one; no one understands, no one seeks for God. All have turned aside, together they have gone wrong; no one does good, not even one.”
This makes me flee from justice. I don’t want to be anywhere near it. The very word makes me sweat like the Peter Lorre character in M. Thank God for St. Paul’s later words in Romans 8:1; “There is therefore now no condemnation for those who are in Christ Jesus.” For all the justice lovers out there; don't be fooled by the siren's call. Justice in itself will not vindicate you or anyone else. Mercy is the only hope any of us have.
Posted by David Browder at 11:00 AM